For the past 32 years, the Americans with Disabilities Act (ADA) has protected the civil rights of people with disabilities.

Recently, we spoke with Steve Ferreira, who shared how the ADA has impacted his life and how he hopes to ensure that the promise of the ADA is being kept in his community! 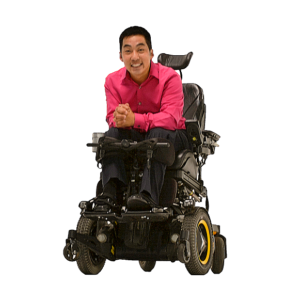 Steve was born with cerebral palsy in Taipei, Taiwan in 1988. He graduated from Bellevue College in 2013 with an Associate Degree with a concentration in Communications. He is currently attending Central Washington University to obtain his Certificate in Accessible Studies.

In November 2011, Steve started a non-profit called Beyond Disabilities to further his goal of disability awareness. As a motivational speaker, Steve aims to raise disability awareness within every community he addresses. In addition to his motivational speaking, Steve has been involved in athletics. He has competed in international competitions both in the United States and Europe, earning the bronze medal in shot put in 2008 and the gold medal in discus in 2010.

Q: What does the ADA mean to you in your life? Why is it so important to you?

It is a law that can be quoted and used when there is a situation where people with disabilities are not receiving the services they need or do not have access to facilities. It is a powerful law.

In 2016, I contacted my hometown, the City of Renton, Washington, to put in signs at a dangerous crosswalk close to my home where I had almost been hit by a car. But nothing happened at the time.

Two years later, while crossing the street in my wheelchair, I was hit by a car that made a right turn onto the road. There was a red light but no warning about watching for pedestrians. I was okay, but my legs would be gone if my wheelchair had not had a leg guard.

I contacted the city again and told them what happened. Using the ADA to back me up, I was able to get the city to install a turning light at the crosswalk. It took two more years for the city to take care of the situation, but I felt a sense of accomplishment when it did.

I drive my wheelchair all over and have over 10,000 miles on it. I drive around 18 to 25 miles a day. If not for the ADA, we would not have cutouts in the crosswalks and lifts on the buses. All it takes is one step to stop me from getting where I need or want to go.

Q: How does the ADA impact you at school and work, in getting around, using transportation, and accessing public and private places?

I typically use public transportation and it’s important for the buses to have lifts installed. There are times when I’m waiting for a bus and the bus will arrive and the lift is broken. Everyone else can enter the bus, but I have to wait sometimes an hour for another bus with a working lift. I joined a committee for people with disabilities in our Metro system to address this issue. Though the committee discussed this issue, nothing was accomplished. I eventually left the committee because I was so frustrated.

On another note, it’s discouraging to have a brand-new building built that does not plan well for accessibility. For example, when I try to access the building, sometimes, the building does not have an automatic door. The doors are typically very heavy, and it is hard to maneuver them when you are using a wheelchair. People need to be more diligent when constructing buildings to make sure they are accessible, and they need to plan to ensure they do not block accessible paths or routes when constructing buildings too!

Q: Tell us about the accessibility program you are taking. What inspired you to pursue this study? What is your capstone project about?

I am currently taking classes at Central Washington University for a certificate in Accessible Studies. There are classes in accessibility and user experience, universal design, accessible information design, and a capstone project.

I have finished the first three classes and I am currently working on my capstone project. My capstone project is entitled “The Importance of Disability Awareness as Part of Diversity, Equity and Inclusion Programs in the Corporate Setting.” I am comparing three companies’ diversity, equity, and inclusion programs and analyzing their attention to disability awareness. It is eye-opening how companies are paying attention to other minority groups but ignoring disability.

Q: Do you plan to advocate for accessibility for people with disabilities? What do you hope to do?

I have done some consulting with local cities, but with my certificate, it will help to have credibility and will add to my resume. I would like to help cities adhere to the rules and regulations of the ADA and thereby help the disability community.

Q: What do you want others to know about the ADA and why it still matters?

The ADA is important to everyone, not just people in wheelchairs or who use other mobility aids. All of us may at some point have a “temporary” disability and the ADA protects them as well. It is a social justice issue.

There are also “invisible” disabilities that are not obvious when first encountered. People with invisible disabilities are also protected by the ADA and are entitled to accommodations. Just because you cannot “see” a disability does not mean that it does not affect one’s daily life and day-to-day functioning.

Disability is unique because it is the only minority group that a person can join at any time in their life.

Q: How can others get involved in advocacy to support the implementation of the ADA and other disability rights efforts?

Others can get involved in advocacy as allies to people with disabilities.

I do motivational speaking to groups about disability awareness. But, when I am out and about, I still get the greatest to the worst reactions from people. Sometimes, people will even come up to me to pray to cure my disability. People need to know that people with disabilities are just like other people. It just may take us a little bit longer to accomplish our goals. Allies should also make sure they know about the ADA and what people need to do to comply with the law – and not take it for granted!

Want to get involved?

Learn more about the ADA here and what to do if you see accessibility needs not being met.

And sign up to advocate with people with disabilities nationwide at thearc.org/action!

The post Why the ADA Matters to Me: A Conversation With Steve Ferreira appeared first on The Arc.