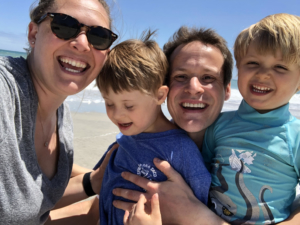 For father, brother, and advocate Burt Hudson, Father’s Day is a time for his favorite “self-imposed tradition.” He’ll be cooking for his family: his wife, Kim, and two boys, Jack, who has Down syndrome, and James. “Being a dad, I hit the lottery,” says Burt. “The best thing I can do is thank the people who let me do it…They call me ‘Dad,’ you know?”

Burt chatted with us recently about how becoming a dad has impacted his life, and he shared some advice for other parents.

When Burt Hudson and his wife Kim were told that their newborn boy Jack had Down syndrome, they “didn’t miss a beat. He was our first kid…a beautiful little guy.”

Burt and Kim had reasons to embrace what is sometimes an unsettling diagnosis for new parents: Burt had grown up with a younger brother, John, who had a developmental disability called WAGR syndrome and who Burt introduces as the “best man in my wedding; also my best friend; also my little brother.” As a child, Burt did not understand why his brother had the challenges that he had and remembers being mad at God and the world for giving his brother a more difficult path. 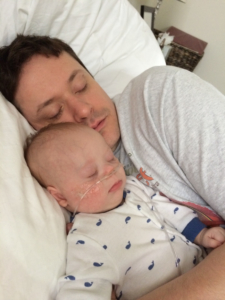 The night Jack was born, Burt reflected on his lifelong friendship with and advocacy for John and told his wife Kim that “she would never have married the person I had become if not for my brother.” Armed with the right information, Burt and Kim felt they could provide Jack the support he needed to flourish: “I don’t know why our son Jack has these challenges, but you give him a couple of years or decades and we’re going to see how he starts to change the world.”

First, however, they needed to get home from the hospital. Burt remembers Kim saying, “Down syndrome be damned. I just want my son to live.”

Soon after Jack was born, he turned purple in the face while trying to breastfeed. He was admitted to the special care nursery and then transferred to the NICU at MedStar Georgetown University Hospital where his medical team, headed by Dr. Mohammed Abubakar, found a host of other medical issues.

Jack came home at four weeks wearing a nose cannula with an oxygen tank in tow. He spent his first three months on oxygen. He was monitored at night by a pulse oximeter that went off frequently and sounded like a “World War II air siren” whenever Jack would kick it off in the middle of the night, making the family dog bark, Jack start crying, and both parents’ nerves sizzle. Eager as Burt was to “open up the world” to Jack, he was also acutely aware that they needed to address his current challenges before moving on. When Jack was able to breathe on his own, Burt and Kim’s ever-present fear was able to give way to research and preparation. 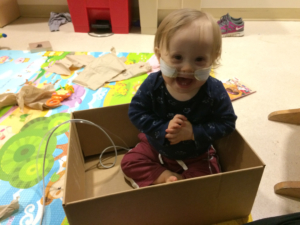 Anticipating the extra assistance Jack would need, Burt and Kim dramatically reorganized their lives. Kim left her job so she could keep track of the “crazy schedule” of Jack’s doctors’ appointments and therapies, as well as learn the languages that doctors, therapists, and eventually the school systems spoke.

Both Burt and Kim expanded their advocacy efforts. Burt had already been volunteering for The Arc: he was connected at first with The Arc of Atlanta by his mom, worked for The Arc of Virginia for 11 years, served on the Budget and Finance Committee for The Arc of the United States, and was recently appointed to the board.

Burt and Kim (pregnant with James), with Jack in tow, met at the capital with Senator Warner and other family advocates from The Arc of Virginia about the need for community-based services. Kim combined her health and communications knowledge with her new experiences with Jack to start a business assisting organizations that help build inclusive communities and support people with intellectual and developmental disabilities (IDD).

Kim is also the treasurer of the Down Syndrome Association of Northern Virginia. Together, they started a small foundation and a Coffee for Caregivers program, dedicated to Dr. Abubakar, to supply the Georgetown NICU with coffee for parents, caregivers, and staff alike. 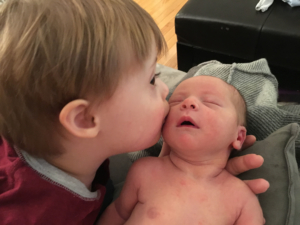 Burt’s professional life was influenced by Jack’s birth. As COO of Leading Age, Burt serves the needs of the elderly and some individuals with IDD. Having both a son and brother with developmental disabilities helps him to understand the needs of his residents. “As a compassionate society, we have to take care of others: the elder population, people with special needs, people who do not have a lot of economic resources,” says Burt. “I’m sure there are a lot of people who live in their little bubble where they don’t see people who may have a more challenging path, but I’ve never known anything different.”

Apart from volunteering for a political or charitable organization, Burt also asserts that “a critical part of advocacy is just love, compassion, and acceptance” and leading through example. He remembers a time growing up when he and his brothers were in the ocean in Florida wrestling. They were just three brothers carousing, even though his younger brother John was going through chemotherapy and had hair loss and a port in his chest. “Nobody stopped the Hudson brothers from wrestling. No medical thing, no nothing. And my little brother was throwing the biggest punches. Some lady walked by and said to my mom, ‘Isn’t that sweet? They’re just brothers.’” The same can be said of how Jack (now 7) plays with his younger brother James (4). They have been a duo ever since James was born. 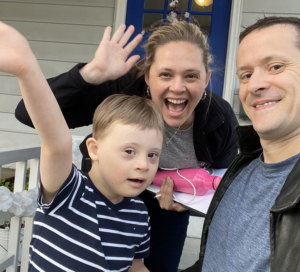 As far as advice for other dads, Burt emphasized the need for information and resources to help Jack over his hurdles. Importantly, though, Burt champions that “every child is different. There is no playbook for anyone…Love your kid. Love your partner…If you love your child as much as you can today, tomorrow will get figured out.”

How to Get Information and Support

If you need help or information about IDD, please reach out to us. You can find your state and local chapters here or you can use our contact form here.

We also encourage you to get involved with our advocacy efforts to ensure that all families can access the resources that they need. Learn more at thearc.org/action.

The post Celebrate Father’s Day With Burt Hudson appeared first on The Arc.