A brief history of The Arc:

On October 21, 1935, a group of dedicated parents gathered with the intent to improve the quality of life for children with developmental disabilities who were living at the institutional State Custodial School at Medical Lake. James Oakley, whose own son resided at the school, organized the gathering, as he wanted to provide the children living at the school with books, toys, and other things that were not provided by the state. With the school superintendent’s approval, Oakley and his wife Annie began to reach out to the parents of other children who were living at the custodial school. At this historic meeting, a commitment was made to work on behalf of institutionalized children as the Children’s Benevolent League (CBL).The CBL began to flourish within other communities throughout Washington State. Fifty delegates from towns throughout the state gathered at the first annual convention, qualifying the CBL as a statewide organization. In 1936, the CBL became an official organization, representing the beginning of The Arc.

The CBL expanded its mission to not only provide for the children in custodial schools, but also to advocate on their behalf. In 1945, the CBL sent a letter to the Governor of Washington State advocating for construction of new buildings at state institutions in order to alleviate overcrowding. This was an early precedent for organized advocacy at The Arc.

The CBL established a trust fund to subsidize medical research for developmental disabilities. In 1952, the CBL changed its name to The Washington Association for Retarded Children (WARC). In 1957, WARC was featured in a television program titled, “Where to Turn” which was aired on the public television station KCTS. In 1958, the King County chapter established a summer camp called Camp Waskowitz, one of the earliest recreational programs for individuals with developmental disabilities in the state.

In the 1960’s, the interest in Camp Waskowitz continued to grow, as did its sources of funding, which expanded to include contributions from parents, corporations and other organizations. During the 1970’s and 1980’s, WARC concentrated on advocacy. In 1974, WARC changed its name from “Children” to “Citizens.” This indicated a shift in thinking to the individual “rights” of people with developmental disabilities. The key issues were the civil rights of individuals with developmental disabilities, the public school education system, and the closure of state institutions. In the 1980’s and 90’s, The Arc of King County, now part of a national movement as a chapter of The Arc of The United States, saw an expansion of self-advocacy on issues affecting individuals with developmental disabilities and their families.

From a vision of improving the lives of children with developmental disabilities who were living in state run institutions, The Arc’s mission has grown to include advocating for the rights of individuals with intellectual and developmental disabilities and their families. On the foundation of 78 years of tireless effort by countless individuals, those involved in The Arc’s community today build on this spirit of service, advocacy and inclusion.

To read more about the history of The Arc, please see Larry A. Jones’ booklet “The Arc of Washington State 75th Anniversary – Pictorial Supplement to Doing Disability Justice 75 Years of Family Advocacy”.

The Arc Announces Departure of Longtime CEO and Leadership Transition

From Friendship to Lifelong Love: Scott and Lauren’s Journey 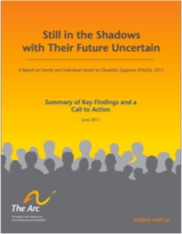 In 2010, The Arc conducted a national online survey, called the FINDS Survey, to obtain perceptions of individuals with intellectual and developmental disabilities and their families on a range of life-span issues. These issues included education, transition, employment, transportation, community living, housing, family joys and concerns, and many more relating to various aspects of living.